Designs have been released for what is set to be Australia’s tallest building, pending approval by government bodies. The design is composed of two towers with twisting glass facades, and vertical and rooftop gardens.

Melbourne-based Cox Architecture (AAMI Park, Adelaide Oval) and Dutch firm UNStudio are responsible for the “Green Spine” design – the result of a sixth-month search by developers Beulah International, which paid $100 million for the Southbank site in 2017. The entire project is expected to cost more than $2 billion.

Cox Architecture design director, Philip Rowe said “Our starting conversation was … how do we create a vertical boulevard of green spaces that … people can engage with on a day to day level? The beauty of Melbourne as it’s known internationally is its gardens and landscape,” he says. “We want to be called ‘The Garden State’, and I think recent developments within the city of Melbourne have not necessarily embraced that.” 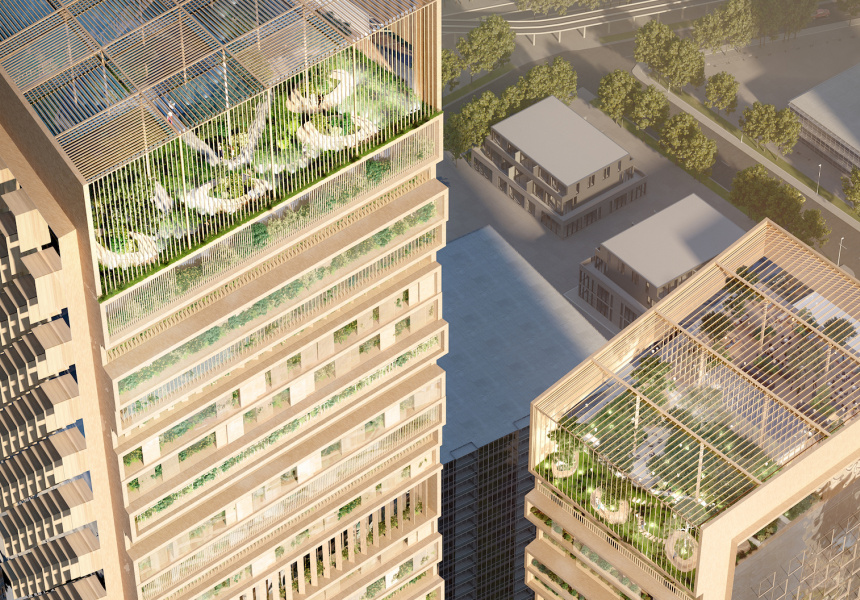 The smaller of the two towers is expected to reach a height of 252.2 metres and will include offices, a hotel, restaurants and bars. The taller tower, at 356.2 metres (more than 50 metres higher than Eureka Tower) will be home to the Future Botanic Garden – a publicly accessible rooftop space.

“The aim is for it to be a little microcosm of the Botanic Gardens,” says Rowe. “We’ve done work with some great international landscape architects to allow us to create a very unique, almost scientific space up there.”

Taller deciduous plants will be planted on upper levels to create shade from the hot summer sun and watered using recycled water from the building.

“We want it to be a living lung of the building in some way that can purify the air, improve shade and can have that freshness of landscape,” he says.

The gardens ascending up the spine will be accessible to workers of the building’s various commercial tenancies. Approximately every eight levels there’ll be a “neighbourhood green space” with more greenery and larger trees. 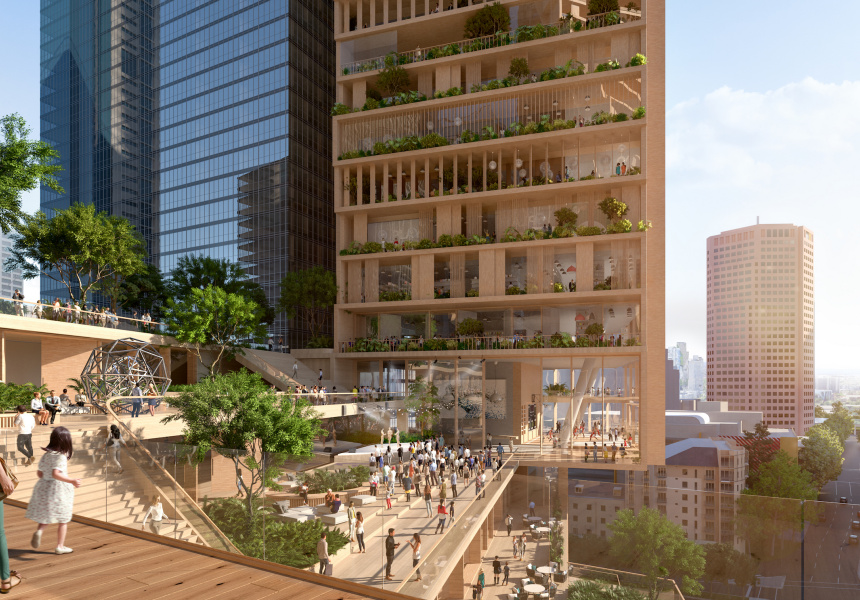 “This is about having neighbourhood green space,” says Rowe. “New York is very dense and it has beautiful pocket parks, so [the question was] how do we create a vertical village with pocket parks within the sky?”

At street level there’ll be a series of stepped terraces, a market and art installations. A school and child care centre, library and cinema will occupy the lower levels of the towers.

“In its fine grain, the scheme displays a strong intent for well-considered public and private amenity and at street level, the proposal displays volumetric qualities that will truly transform the public realm by eroding the hard edges that is prevalent in Southbank.” said Rowe.

“This is not just another project in the skyline for the city of Melbourne. Every city in the world is tackling the issue of population growth. This is a proposition to say what do new developments need to be like to assess the idea of increased population but improve the quality of neighbourhoods and vertical living.”